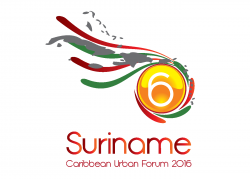 The 6th Annual Caribbean Urban Forum: Sustainable Urban Development? The Gap between Rhetoric and Reality (CUF2016) was held from the 27th – 29th April, 2016 at the Royal Torarica Hotel in Suriname. The primary focus of the Caribbean Urban Forum is on advancing land use planning and urban management within the Caribbean urban sector. The Organizing Committee included The Institute of Graduate and Research Studies (IGSR) of the Anton de Kom University of Suriname (AdeKUS), Caribbean Network for Urban and Land Management , Caribbean Local Economic Development Programme (CARILED), United Nations Human Settlements Programme (UN-Habitat), Inter-American Development Bank (IDB) and Caribbean Evaluators International (CEI) in association with CARICOM Secretariat and with supportby the European Union. The past CUF Conferences were held in Guyana (2011), Jamaica (2012), Trinidad and Tobago (2013), Barbados (2014) and Saint Lucia (2015) and the conferences have contributed to creating a growing regional and international audience of professionals that work in the field of urban and land management. The major goal is to facilitate activities that contribute to the strengthening of the regional planning framework.

This year the three-day conference explored the primary theme of “Sustainable Urban Development? The Gap between Rhetoric and Reality”, which recognizes the need for successful transitions from understanding and research of urban and land issues to implementation and achievement of desired results. This year, the conference was the largest since inception with 196 participants from all across the region and the world.

At CUF2016, we also looked at cross-cutting criteria: Transition Management, and Monitoring and Evaluation.

Each year, we try to improve CUF for the benefit of the participants and the wider urban planning and built environment community. This year we facilitated the presentation of Lillia Blades of UN-Habitat on “Higher Education for Sustainability” and the live streaming of the panel entitled “Urban Indicators for the Caribbean” which focussed on the measurement, monitoring and reporting on local sustainability.

In addition to the presentations, CUF 2016 hosted several events that boosted the knowledge sharing and relevance of the event.

The Spatial Planners Association Suriname (SPASU) was launched at CUF 2016. The formation of national associations of planners in each Caribbean island and their incorporation as members of the Caribbean Planners Association supports strengthening of the regional planning framework by encouraging the greater recognition of the planning fraternity and their role as a policy lobby.

Prior to 2012, only three national associations of planners existed: Trinidad and Tobago Society of Planners (TTSP), Barbados Town and Country Planners Society (BTCPS) and the Jamaica Institute of Planners (JIP). With assistance from other international planning associations and support from UN-Habitat, the Caribbean Planners Association was formed in 2012 as an umbrella body and the formation was endorsed by CARICOM. Since then, efforts have led to the formation of the Belize Association of Planners (2013), Saint Lucia Institute of Land Use Planners (SLILUP) (2015), Planning Association of Dominica (PAD) (2015) and the Guyana Planners Association (GPA) (2016).. British Virgin Islands and St. Vincent and the Grenadines are in the process of forming national associations.

Some great events were planned for CUF 2016 and the first day saw three tours being planned dealing with various aspects of the built environment: 1) Coastal Zone tour; 2) city Tour; 3) Commewijne Tour. The city tour took participants through the Paramaribo, the capital city of Suriname. On the tour they focussed on the colonial structures and the heritage of Paramaribo. Looked at were the history of the plans, poorly maintained structures and the lack of government intervention in repair and maintenance assistance for the structures.

On April 26th 2016, immediately prior to the CUF, at the Anton de Kom University of Suriname (AdeKUS), the United Nations Settlements Programme (UN-Habitat), in conjunction with the CNULM executed a one-day workshop “Planning Laboratory on Sustainable Development: Urban Planning for City Leaders”. A total of 30 participants attended the workshop from countries such as Belize, Trinidad and Tobago, St. Lucia, Barbados, Guyana, Suriname, and Jamaica. For more than forty years, UN-Habitat has been one of the leading urban and human settlements programmes worldwide, and this year was no exception.

The one-day workshop sought to present the UN-Habitat’s vision and the New Urban Agenda to urban and built environment professionals.  Suriname was the main case study and key issues and challenges facing the country were looked at along with discussions on projects and tools that can strengthen the planning practice in Suriname.  Presentations were made addressing:

The ACP-EU project: Mainstreaming Energy Efficiency and Climate Change in Built Environment Training and Research in the Caribbean (CarEnTrain) aims to improve energy security in Caribbean countries and mitigate climate change by reducing the consumption of energy resulting from urban sprawl, inefficient transportation systems and improving energy efficiency of buildings.

The project hosted the urban design studio in order to educate campus administrators and urban professionals on the importance of urban design to the greening of campuses. The first workshop was held at Sir Arthur Lewis Community College in Saint Lucia in 2015. This year, it was held at Anton de Kom University of Suriname from 25th – 26th April, 2016. Facilitating this Urban Design Studio were Bart Janssens and Tom Coppens of University of Antwerp.
The basic principles behind urban design were taught and examples of urban design at different campuses were discussed. This second instalment began with a self-taught module prior to the workshop. The participants were asked, in addition to the written material, to complete a small assessment of a building of their choice and present their findings at the Workshop. The final day of the workshop as in Saint Lucia, saw the participants doing a group walk-through at the AdeKUS campus which culminated in a small presentation on their findings.

To better facilitate the knowledge sharing from CUF 2016, CNULM will be publishing a CUF 2016 Conference Proceedings with the papers from the conference.  These papers along with the presentations will be made available online. 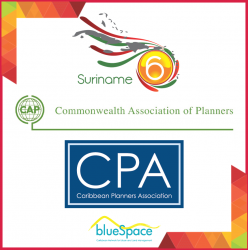 CAP Webinar Series has joined CUF 2016 to bring you “Urban Indicators for the Caribbean”.

Panellists will share their first-hand knowledge of indicator-based monitoring and reporting systems, identify challenges and opportunities for adapting these tools and methodologies to the Caribbean context, relying on available data to report on sub-national trends, and designing tools that reach urban managers and local decision makers.

Participants will be required to log in as a guest with their e-mail address. No password is required to log in under this option. Only 100 spaces are available so register early. For more information, visit the Caribbean Planners Association website at: www.caribbeanplannersassociation.org and blueSpace Caribbean website at: bluespacecaribbean.com

Registration: Please email namaingot@gmail.com to register for the event. We hope you can make it!